BOLOGNA is traditionally a democratic and generous city and knows how to welcome its visitors with sublime care, delicious cuisine, culture and amusements. The city almost hosts 1 million tourists a year from all over the world.

Bologna, chief town of the Italian region of Emilia-Romagna, has been given three nicknames: “La dotta”, erudite, because of its well-known medieval University. The University of Bologna, founded in 1088 is the most ancient Western academy.  People from all over Europe (among whom Dante Alighieri, Thomas Becket, Albrecht Dürer and Nicolò Copernico) have always come to Bologna to study with the best representatives from all fields so that the town has become a more multicultural place, famous for the hospitality of its citizens.
The nickname “la rossa”, red, is due to the colour of its roofs, the most amazing way to see them is from the tower “degli Asinelli”. The symbol of Bologna is, in fact, the Two Towers, Garisenda and Asinelli, both towers were built around 1110 by the families who gave them their names. Bologna is also called “la grassa“ which means fat because of its delicious cuisine. Here you can taste all traditional Bolognese dishes such as tortellini, lasagne, tagliatelle al ragù, mortadella and many more.

CLASSIC TOUR AT THE DISCOVERY OF BOLOGNA “ERUDITE”-”RED”-“FAT” TOWN

From Piazza Maggiore, to the Library of Archiginnasio and Anatomical Theatre, Towers of Asinelli and Garisenda, Piazza della Mercanzia, complex of the churches of S. Stefano (visit 3 hours)

This itinerary is the most classic for a first approach to the city, and allows us to discover places and monuments, which Bologna is universally known for: first of all Piazza Maggiore, one of the most beautiful, largest and most famous squares in Italy. 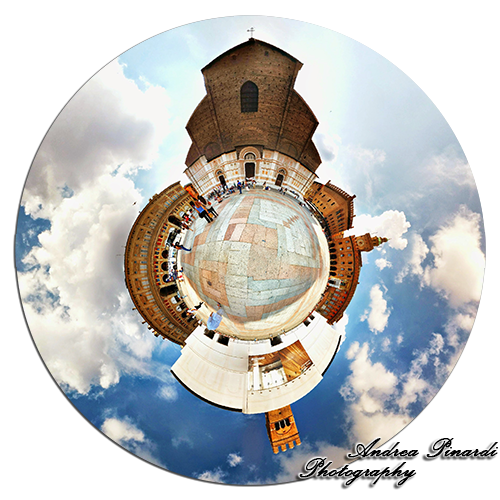 Ancient Roman forum, secular home of the most important market town, a place of popular assemblies from the medieval period, dedicated to civil and religious ceremonies, shows and tournaments, but also executions, Piazza Maggiore is still the main and most beloved hangout of Bologna.

It is the result obtained by the demolition of entire blocks starting from 13th century during  the free Commune, the 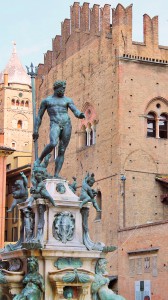 oldest palaces are those linked to the North: Palazzo del Capitano,  Palazzo del Podestà and Palazzo di Re Enzo,  prison for  the son of Emperor Frederick II of Swabia, which flanks Piazza del Nettuno, overhung by the beautiful Fountain of Neptune built in 1564 and embellished by Flemish  sculptor Giambologna in celebration of the new Pope Pius IV.

On the other side is the imposing red Palazzo Comunale, turreted and crenellated, better known as Palazzo D’Accursio, used today  as the Town Hall. Here we can see two main buildings, the Gothic one stands on the left with portico, obtained from the transformation of the building of the famous teacher of law at the Studium, Accursio.

In Piazza Maggiore we can also admire   the Palace of Notaries, 14th century, seat of one of the most powerful guilds and besides, dominating the south side of the square, the unfinished  majestic Basilica of S. Petronio, which many regard as the Cathedral of the city,  as it’s  the largest and most famous  bolognese church, the 6th largest church in Europe, which had to overcome the very San Pietro in Vatican.

Begun in 1390, in Gothique style, works were completed 300 years later, but left unfinished both the marble facade and unrealized most ambitious project started by architect Antonio di Vincenzo. Enemies of the work were the popes who  opposed to such presumption  and very high costs. 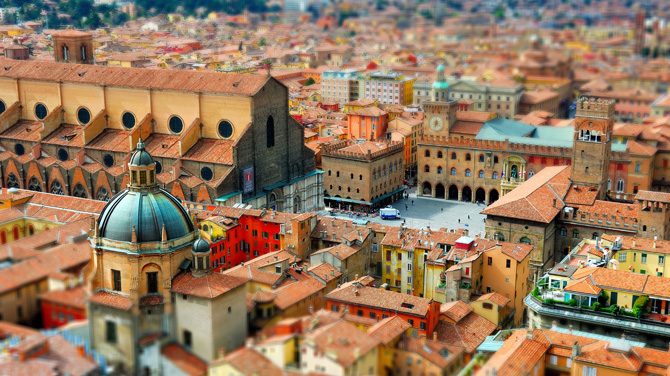 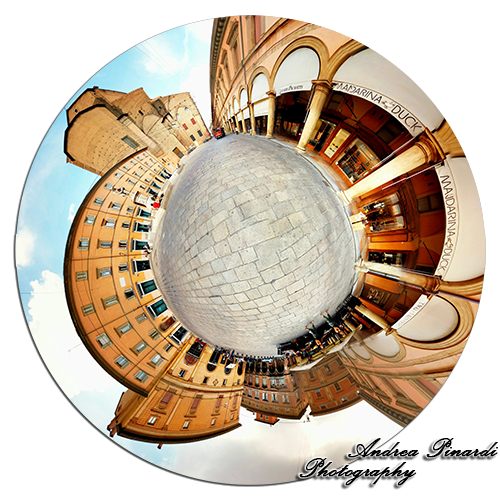 From the arcades we take Via Rizzoli, elegant porticoed street, shopping destination, to reach another symbol of Bologna: the Two defensive Towers named Torre degli Asinelli and Torre Garisenda.  The  first one is the highest with its 97 meters and its nearly 500 wooden steps reaching the top; the Torre Garisenda, pendant, reduced to 48 meters for risk of collapse. These Two towers, desired by some of the most powerful families, competing for ruling, remember that there were up to 100 towers in Bologna between military towers and tower-houses; Bologna boasted the primacy both for medieval towers and numbers of arcades (38 kilometers)! 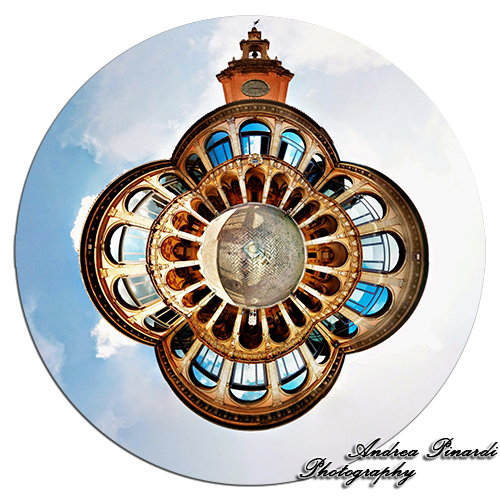 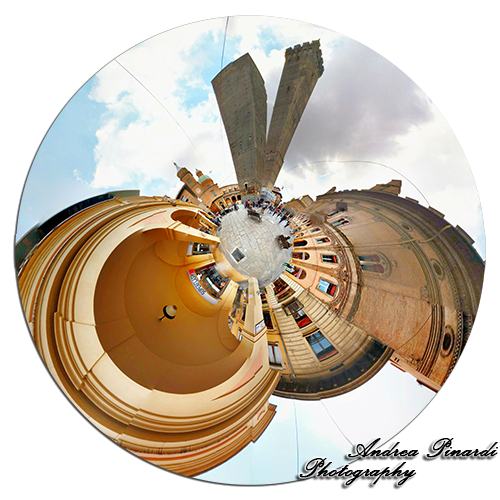 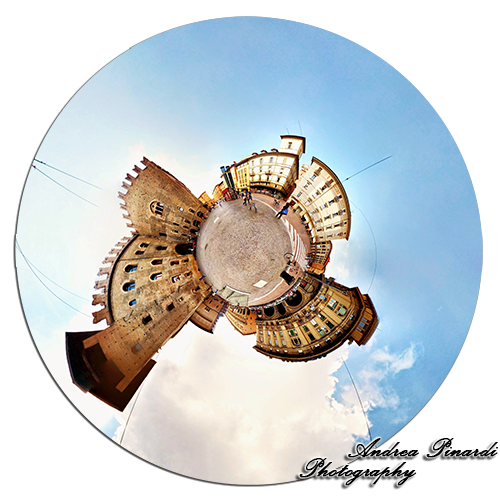 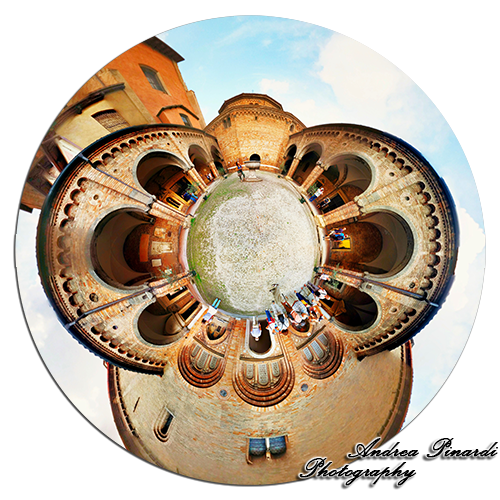 From the  Porta Ravegnana (Gate of Ravenna) turn right to get to the Piazza della Mercanzia, dominated by the elegant 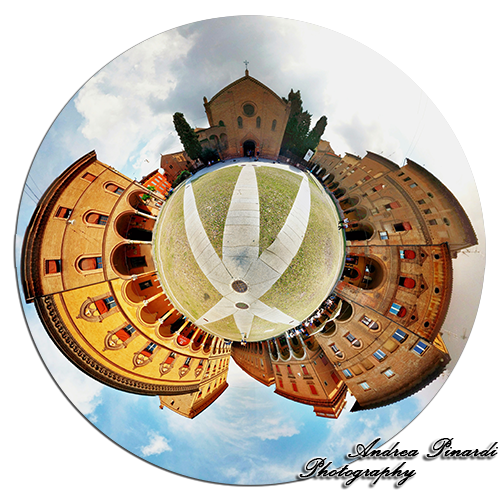 Merchant palace, from the high and solemn loggia. The palace was built in the late 14th century by Antonio di Vincenzo as a law court to solve the issues between the merchants. On the left  Via S. Stefano will lead us to the homonymous square, one of the most collected and enjoyable medieval squares of the city, still cobbled, lined with beautiful buildings with porticoes, with a backdrop characterized by facades of three of the oldest churches in the complex of S.Stefano: Church of the Cross, Church

of the Holy Sepulchre and the Church of SS.Vitale and Agricola. The arrangement and shape of the ancient churches took from the fifth century by Bishop Petronio, the holy Patron of Bologna, who  returning from a pilgrimage to the Holy Land, had the intention to reproduce the sights of the Holy Sepulchre, the path of Calvary and the Passion of Jesus for the devotion of those faithful to Bologna. Restored  between  the 19th and the 20th centuries,  St. Stephen is the Romanesque religious complex best preserved and most fascinating of Bologna.

Returning to Piazza Maggiore, supposed to have  more time available, we enter the Church of Santa Maria della Vita to admire two exciting  groups of terracotta sculptures: The Lamentation over the Dead Christ by Niccolò dell’Arca and The Death of the Virgin by Alfonso Lombardi in the adjacent Oratory  of the Brotherhood of Flagellants.

Other interesting monuments are well worth to be seen to complete One full day visit: