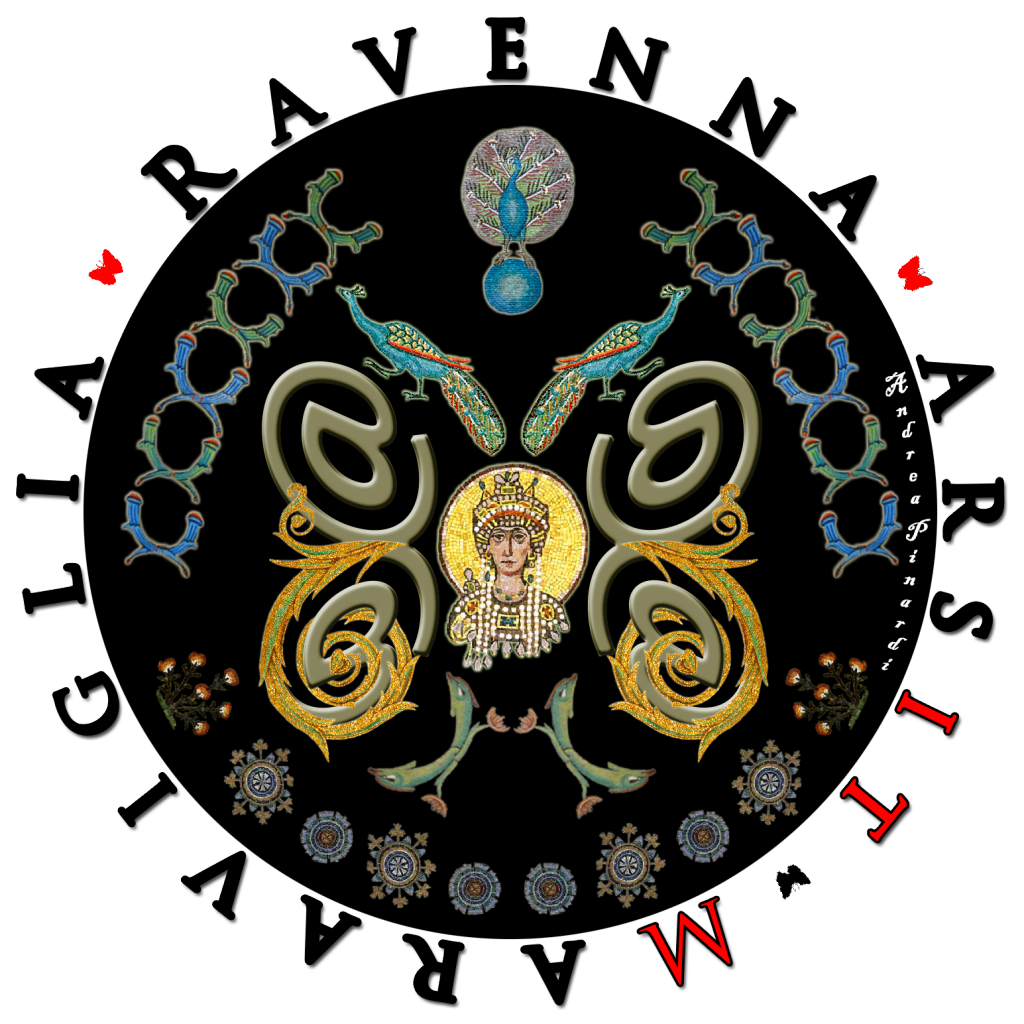 A guided tour of the historic center of Ravenna is a must for those who love Beauty: Ravenna is a city of art so rich in history and beauty that has nothing to envy to the most famous cities of the ancient world;  Ravenna was indeed three times a capital for 300 years: the Western Roman Empire, then of the Kingdom of King Theodoric of the Goths and lastly of the Byzantine Exarchate following the recapture by Justinian. A so favored geo-political and cultural condition has left its mark in the history of the city and especially in its monuments sparkling with beautiful colored mosaics that have amazed and inspired in time  artists  like Dante Alighieri, Gustav Klimt, Gustav Jung , Cole Porter and many others.

If a full day is not enough to exhaust the guided tour of the entire Ravenna, your authorized Tourist Guide guarantees to show  the best and most significant monuments of Ravenna recognized by Unesco as a World Heritage Site in 1996:

Our guided tour of Ravenna begins near the train station, where we m 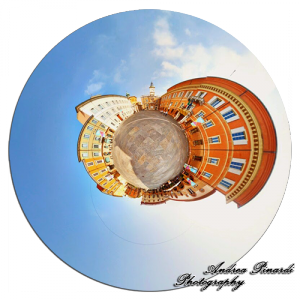 eet the oldest  church of Ravenna, St. John the Evangelist, 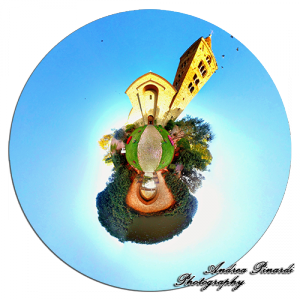 commissioned by the noble Galla Placidia, to fulfill a vow expressed after surviving a shipwreck, returning from Constantinople with her children. Not far from Piazza del Popolo, the social heart and favorite haunt of tourists, through Via Cavour we reach the Mausoleum of Galla Placidia, the sister of the Roman Emperor of the West, Honorius. This is one of the oldest and most fascinating monuments of Ravenna thanks to the charm of the beautiful colored mosaics of the fifth century, which show all the influence of the Hellenistic-Roman period, alluding to the themes in the victory of eternal life over death. Despite the presence of three sarcophagi, the mausoleum seems never to have been used as an imperial tomb. The contrast between the  bare exterior and the interior rich in glittering and impressive mosaics  can only increase our feeling of rapture and  marvel!

A few steps far we meet the Basilica of San Vitale, one of the most significant monuments of Byzantine art in Italy. Constructed from 525 A.D. by order of the Bishop Ecclesio, it was consecrated in 547 by Bishop Maximian, thanks to donations from the wealthy Ravenna banker Giuliano Argentario. From an architectural point of view the Basilica is octagonal in plan and combines elements of both the Western and Eastern tradition, recalling the architectural models of Hagia Sophia in Constantinople and the Basilica of San Marco in Venice. Visiting the Basilica of San Vitale means living a unique and unforgettable experience; raising our eyes to heaven the beautiful mosaics of the presbytery and apse tell us about the origins of Christianity, as a sort of illustrated Bible for the people, having in the pictures their main means of knowledge. Among the mosaics we remain enchanted by two engaging panels about the Emperor Justinian and his wife Theodora, followed by the respective  court processions,  depicted with all the glitz that required their political status; a kind of group photo about  Ravenna Byzantine Court of  nearly 1500 years ago! 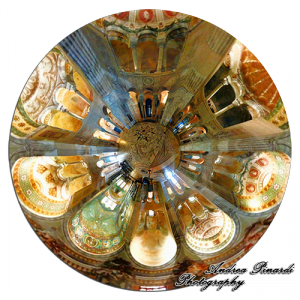 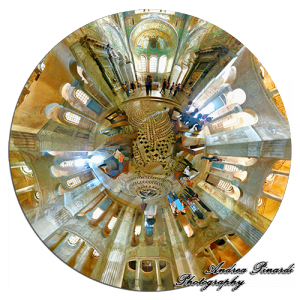 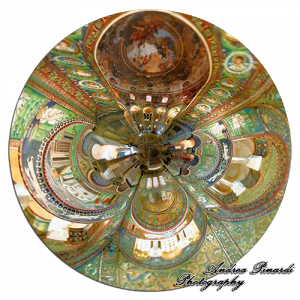 Another outstanding monument of early Christian art of Ravenna is the Orthodox Baptistery, near the Cathedral: the baptistery is a magnificent setting where architecture and decorations blend in perfect harmony and is among the oldest and best preserved monuments of Ravenna. Dating back to the early decades of the fifth century, it was decorated by the Bishop Neone at the end of the period of Galla Placidia (450 AD). The Baptism of Christ depicted in a mosaic medallion of the dome is not the only element of surprise for decorative beauty; there are also  magnificent stuccos  and colored precious marble on the walls! 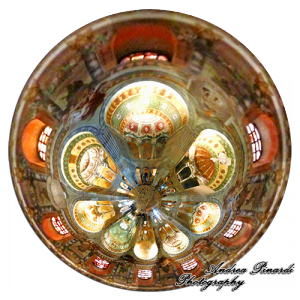 We continue on our journey to reach in a short distance the Archbishop’s Museum: this visit reserves other unexpected masterpieces: the Bishop Chapel of St. Andrew, a retired oratory for prayer Bishop Peter II and the Orthodox Bishops during the period in which Theodoric and Arianism were dominant, early sixth century, and yet the amazing Maximian Bishop’s Chair, a precious ivory lace that was a gift from the Byzantine Emperor Justinian, made in Constantinople in the mid-sixth century. These are just some of the art treasures preserved in the treasure chest of the Archdiocesan Museum!

To better understand the differences between Catholicism and Arianism, we go to the Arian Baptistery, built during the reign of Theodoric the Ostrogoth, when Arianism was the official religion of Ravenna. The mosaics of the dome celebrate the Baptism of Christ according to the Aryan rite. Arianism has always been considered a heresy of Christianity, as the Arian doctrine recognized Christ as the Son of God, but only as a man without divine nature; only through the rite of baptism, Christ would become divine, according to the Arians. For this reason, the mosaic depicts Jesus as a young teenager naked, highlighting his physicality and humanity, in the Jordan River next to John the Baptist who baptized him.

n we reach Via di Roma and continue towards the Basilica of St. Apollinaris Nuovo, built by King Theodoric in the late fifth century as the Palatine Church adjacent to the Royal Palace. This stately church houses the largest cycle of mosaics in the world. The walls of the main nave are divided into three bands of mosaics: the higher-end chronicles the life of Christ, the central one has Saints and Prophets and the lower one shows the famous Palace of Theodoric. The cancellation of the figure of the Emperor and of other characters, covered with white drapes, occurs when the basilica passes from the Arian to the Catholic and the Arian heresy is then defeated. On the opposite wall are portrayed ships at the harbor of Classis, one of the most important ports in the Mediterranean during the Roman Empire.

We can pay homage to the father of the “Divine Comedy” and Italian literature, by visiting the Tomb of Dante in the Zone of Silence: it is a neoclassical temple built at the end of the 18th century,  in which a  perennial lamp burns  fueled by oil donated by the Florentines every year on the second Sunday of September, for the celebration of the death of the poet. Dante died at Ravenna, during his exile in 1321. 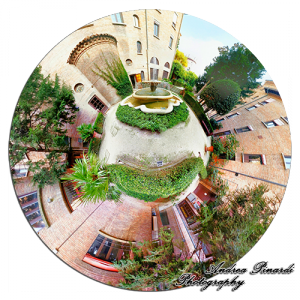 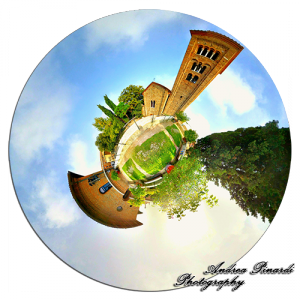 Other UNESCO monuments  worth a visit in Ravenna outskirts: 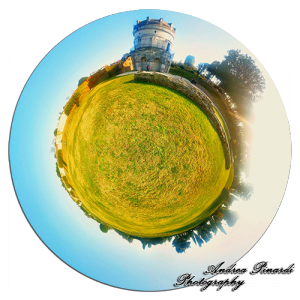 Just outside the historical center is the Mausoleum of Theodoric, built in 520 AD as the grave of the Gothic king, made of blocks of Istrian stone, which makes it unique compared to other monuments of Ravenna in red bricks. Truly original is the roof, obtained from a single monolith-shaped dome of 300 tons and 11 meters in diameter! According to legend, the red porphyry basin which is located on the top floor of the Mausoleum is the same in which Theodoric met his death. In a stormy day, for fear Theodoric took refuge in his mausoleum but lightning was to hit him just as he was taking a bath! Legends aside,  this barbarian king ruled Italy for 33 years, bringing  peace, tolerance and wealth. 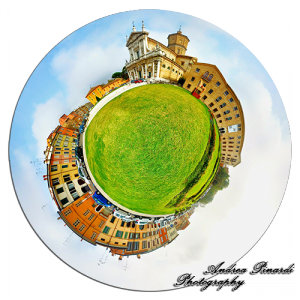 The Basilica of St. Apollinaris in Classe is the only Unesco monument of Ravenna located 8 km outside the city center. Among the basilicas of Ravenna it is the most impressive and majestic. The mosaics compete in beauty with those of the other churches in the city and depicting Christ surrounded by the Evangelists, while the sheep symbolize the apostles. The face of Jesus appears in the center of the Cross, decorated in a circle with 99 stars.
The whole performance takes place between the sky and the charm of a green paradise full of rocks, trees, flowers and colorful birds. The Basilica of St. Apollinaris in Classe was dedicated to the patron saint of Ravenna, Apollinaris, first bishop of the Christian evangelist The imposing church was built by the sea, a few kilometers away today. Next to the church are the ruins of the ancient city of Class, seat of the Roman fleet in the Adriatic Sea at the time of Octavian Augustus.